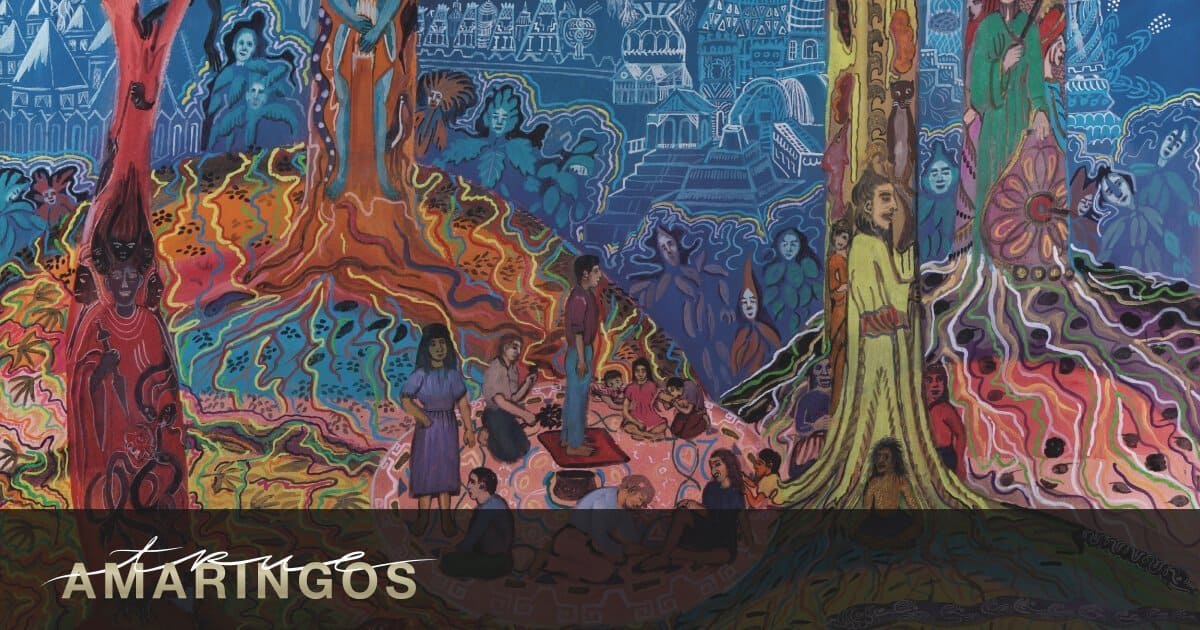 During the early years of my collaboration with Pablo Amaringo (1985-1989), which resulted in articles, exhibitions I curated in Europe, the United States, Japan and Mexico, and my book with Pablo Ayahuasca Visions: The Religious Iconography of a Peruvian Shaman (North Atlantic Books, Berkeley 1991), I purchased from Pablo a collection of paintings which have been in my possession for around thirty years. They have the special quality of freshness, before he began a prolific production destined first of all for commercial purposes. The time has come for me to release some of them. This website has as its purpose to find new homes from these works of art, the seeds of so much to come, given that Pablo’s art has had such a big impact in the visionary art not only of Amazonian artists, but of artists from all over the world. I am also offering here limited-edition collections of high-quality prints in original size covering various periods in his art, such as a collection of never published  drawings of Shipibo women done in 1975-6, some early landscapes he did before I met him, and then a collection of particularly interesting ayahuasca visions, some of them published earlier, some shown here for the first time.

In July 1985, just after organizing the very first international and interdisciplinary symposium on plants of the genus Banisteriopsis and its additives, Dennis McKenna and I met in Pucallpa to gather plants for Botanical Dimensions, an ethnobotanical garden created in Hawaii by his brother Terence with his then wife Kat Harrison. Dennis took me to visit Pablo Amaringo, living in a very poor district of Pucallpa, on the shores of the Ucayali River in the Peruvian Amazon region. From our conversation came the fact that besides having been a vegetalista (a person who derives his knowledge from certain powerful plants, such as those involved in the preparation of ayahuasca), an occupation he had abandoned seven years ago, he was also an artist. He showed us some watercolor landscapes done on cheap paper. I noticed his detailed knowledge of the flora, fauna and ways of living of Amazonian people. He told me he could remember anything he had seen. In other words, he possessed and extraordinary eidetic memory. I asked him whether he also remembered what he had seen under the effects of ayahuasca during the time he was a practicing healer. He did, he said. Before Dennis and I left Pucallpa, we went to see Pablo again. He had prepared his very first two ayahuasca visions, and gave one to each of us. (Link to first two visions).

I was then living in Helsinki, working on my doctoral dissertation on Vegetalismo, Peruvian Mestizo Shamanism, for the Department of Comparative Religion of Stockholm University. I could see in Pablo’s painting elements I knew from my fieldwork with various ayahuasqueros. There were however depictions of beings I was not at all familiar with. I wrote to Pablo asking for an explanation, not only from the painting I had received, but also about some beings in the painting he gave to Dennis. I got a detailed answer which made me think Pablo was an incredibly rich source of information about the shamanic mestizo tradition of this area of the Amazon. This was the beginning of a collaboration that resulted in several articles, the book Ayahuasca Visions, and a series of exhibition. It was an intense collaboration that went all the way to 1994, when I decided to concentrate on other areas of ayahuasca research.

I am honored and proud to have had a role in bringing the paintings of visionary artist Pablo Amaringo to the attention of the world. In fact, my role was very minor. I met Pablo in 1981, when I passed through Pucallpa on my way home after having conducted fieldwork in the Amazon as part of my dissertation work. It was a casual encounter in a bar, and later, Pablo took me to his modest home and showed me some of the watercolors he had created, mostly of natural landscapes. They were unimpressive.

It was not until 1985, when I returned to visit Pablo in the company of my friend and colleague, Dr. Luis Eduardo Luna, and introduced him to Pablo. It was that introduction that made all the difference. In our first conversation, Eduardo and I learned that Pablo had once been a powerful ayahuasquero, but had stepped away from the practice due to conflicts with brujos. It was on that occasion that Eduardo asked if Pablo had ever considered painting his visions, which he claimed to remember in detail. The thought had never occurred to him! But when we returned to his home the next day, he had completed the first two visionary paintings, and he gifted one to each of us. That seed of an idea that Eduardo planted in his mind flourished into a prolific career spanning many years. Single handedly, Pablo founded an entirely new tradition of Amazonian folk art, which set the standard by which all subsequent works in the tradition are now judged.

But the world might never have known about this brilliant artist’s work  had not Eduardo taken the lead in sharing it with the world. In the years following their first encounter, Eduardo found buyers for his work, arranged exhibitions in international venues, and collaborated with him in the founding of the Usko Ayar School of Amazonian Painting, which enabled many young people in his community to learn the techniques. Some even became accomplished and well recognized artists in their own.

I have cherished that first painting that Pablo gave to me, along with two others that I received from him in the first years after he undertook his career. When Eduardo told me that he was considering selling the painting that he had received in Pucallpa, along with others that he had collected over several years while working with Pablo, I was at first shocked. Who would want to give up such a unique and valuable treasure? But then, on reflection, I could see the wisdom of Eduardo’s plan. We have each had the pleasure of enjoying Pablo’s earliest creations, now for 35 years. For all that time, mine have always been close to me, on display in my homes, which have changed several times over the years. But now we are getting older, and we have decided that to offer the paintings to the right person, someone who will appreciate them the way we do, is the right thing to do. The proceeds from the sale will enable us to advance the causes we believe in, and often have worked on together for many decades, even before we met Pablo. So it is time to let them go. May their light shine forth into the world and remind us always of a magical era, a place of dreams and myth and mystery, a place that is lost forever, but that lives on in the vision-inspired paintings of a humble but inspired genius: Pablo Amaringo.