We see here a vegetalista cleansing the body of a person with certain impurities, as humans are always gathering the influence of people and places.

An object that resembles a bell represents the vibration of hearing and the heartbeat, because all that one hears is connected with the heart, and through the ears one gets to know many things. The spirits with red eyes bringing the bell are evil when they want revenge, but they may also be very kind. They are called papalluses.

One of the vegetalistas is curing a patient suffering from a malady of the stomach, by means of the spirits of ayahúman [Couroupita guianensis, the cannon-ball tree], whose heads are the fruits of the tree and bodies are twisted tingunas of various colors. These spirits help the vegetalista by extracting the illness with the power of their tongues, which move in accord with the smoke the vegetalista is blowing on his patient.

A queen comes to assist the vegetalista shaking his schacapa [rattle made of the leaves of Pariana sp.] over a patient. She is accompanied by the ladies under the bell, dancing to the music of the icaros. This queen has the machinruna [ape people] as her guardians, spirits found near the ayahúman, sometimes hidden in its branches.

The armed beings with four faces live in enchanted cities located in huge caves beneath the sea. These beings give strength to the patient such that he is able to withstand the cure of the queen. They are very powerful and use their swords to repel any attack or to save the lives of patients suffering from serious illness. They have four heads because they dominate the four poles of the earth. Their clothes are made of scales, because they are aquatic beings.

To the right we see several boas, which represent the powers of ayahuasca. The colors represent the living forces that make up the substance of this plant.

We see a flying object coming from the North with blue beings from Venus. Half the body of these beings is like that of humans, the other half is made only of energy. They come to teach the vegetalista medicine.

In front of them are two beings resembling women. They are oceanids that travel on top of a gigantic crab. They are mermaids, but not very beautiful, because their faces are like those of an ape. Further behind are several vacamarinas sirenas [manatee-mermaids], with fins instead of arms. The rest of their bodies are composed of snakes, and they move at great speed.

In the center is a spaceship that travels at great speeds, and to the right a great city surrounded by dancing queens. The city has a giant harp, called wakan harpa [harp that makes one cry]. Here live the great Radeles, the chiefs, and the Asaritas, their vassals. They all live in harmony. When one arrives in this city, he or she is invited to dance and eat.

To the left there is an enchanted city, which human beings can see but never visit unless one is almost a spirit, a sublime shaman who has practically abandoned his body, like for instance the great gurus from India. 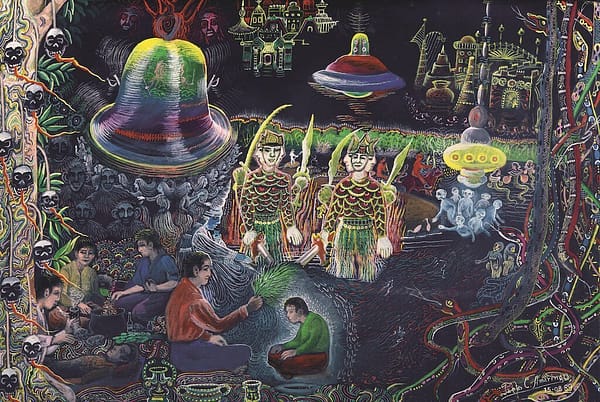