Pablo’s words:
I had this vision in 1971, when I was about to heal a woman that had been harmed by means of the kapukiri –a substance that comes from rotten leaves– when she was in her chacra. The woman had the instep of one of her feet swollen. She had had this illness for four months and arrived at the house of my brother Manuel, looking for a curandero. He tried to cure her, without success. But I was able to cure her by means of the icaro del kapukiri and the leaves of catahua negra [Hura crepitans].

Kapukiri is almost like a dark brown vapor that rises and collects in the atmosphere. In archaic Quichua, kiri is that which stinks, that which is rotten. Kapu means substance, lime. So kapukiri is something that has decomposed from a living thing in order to give strength to other lives. In the same way that fairies get their nourishment from perfumes, there are beings which inhale these substances. Evil shamans use the kapukiri to bring harm, and if one doesn’t know its icaro, the patient will not heal.

There are several kinds of kapukiri. When it is produced by the puka-lupuna[red lupuna, Cavanillesia sp.], the first tree to the left in this painting, the person feels as if his head grows larger, and feels a smarting all over his body. The illness is most often located in the stomach. If the patient is a pregnant woman, the newborn baby looks rachitic.

If it is produced by ajosquiro [Gallizia corazema], the second tree, the person becomes very nervous, afraid, and feels as if a worm was biting him.

When it is produced by the catahua negra, the third tree, the patient feels that his mouth is very dry and his lips are cracked. The nerves contract, and the person shrinks. It produces fever, and the person develops something of a stutter.

The kapukiri produced by the huairacaspi [Carpotroche grandiflora], the tree to the right, is the most frightening. The person feels as if he is walking in slow motion, as if in the air. It generates pain in the ears, and the skin turns grey, as if burned. It acts quickly, and the persons dies after three to five days, with heavy vomiting.

These trees have a sublime function in esoteric shamanism. The puka-lupuna, for example, is a great magician that developed in other dimensions and came to possess this tree. All these trees are very rigid regarding their cleanliness, and they punish those persons that mock them. One should not urinate nor defecate on their leaves. One should not use their leaves as paper to clean oneself. One should not play with the leaves, nor cut these trees for the mere sake of it, nor should one use them as lumber. These trees are generating substances that other beings use as their nourishment. If one urinates and defecates on the tree, the tree will then emit something harmful to these beings. That is the reason they are very defensive.

In the background we see cities, towers, monuments, and parks associated with the kapukiri. To the left we see huts where the great shamans of various tribes arrive in spirit, to be trained regarding the kapukiri. There one learns that a young man should not sleep in the bed of an old man. Native people, particularly the elderly, don’t like anyone to touch what belongs to them. All that belongs to the shamans must be respected — the bed, the plates, etc. This is because a young man is full of filth. When one becomes old, one learns to be cleaner.

The city in the center symbolizes the purity of a shaman when, already old, he goes to another stage. It is the purity that the person acquires through his death, when he leaves this life and is transported to another place. This is when a person has been ordained, when he has been requested. Not everyone goes there. I don’t reject the Christian belief according to which Christ said to his disciples: “Whither I go, thou canst not follow me now; but thou shalt follow me afterwards” [John 13:36]. But this does not hold true for everyone. Christ said: “In my Father’s house are many mansions: if it were not so, I would have told you. I go to prepare a place for you” [John 14:2]. But this doesn’t mean that this is for all humanity, but for certain chosen persons. Christians were mistaken when they thought that everyone shall go to heaven. 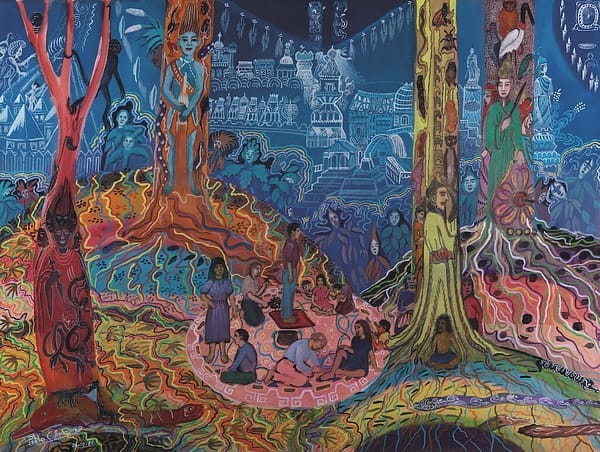