Pablo’s words:
This happened when I arrived in Tamanco in 1959. My father took me to a settlement called Brazil. In a house on one end of town lived a woman called María Pacaya. My father had to cure several patients, and there he took ayahuasca. He also gave me the brew after blowing on it with the purpose of helping me, as I was suffering from a heart disease.

The brew was so strong that I was at the edge of screaming. The visions were so vivid that I thought what I saw was not just imagination, but a contact with something physical and real. I saw sphinxes; I was in Africa, Europe, and the Americas; suddenly I saw a doctor dressed in a grey-violet suit. He was an American. His wife was wearing an emerald-green dress. Their daughter had a dress of the same color. They seemed to be nurses, and had with them scalpels, scissors, pincers, hooks, cotton, needles and thread, and medicine of various kinds.

The doctor asked me to take off my shirt. He took a large, broad knife and opened me from the clavicle to the last rib of the left side. With a hammer he broke the ribs and opened my chest. He put my heart on a dish, where he operated on its arteries and joined them with some sort of soft plastic tubes. The doctor showed me the location of the damage in my arteries.

In the meantime, the daughter of the doctor had already prepared the needle and thread needed to sew the wound. They put my heart back in its place, closed my chest, and cleansed and sewed up the wound. They told me that I had to fast for a week. I did so, and since then I have felt perfect.

A group of Adonitas, the guardians of the most sacred temples of the universe, came to surround the house where we had taken ayahuasca. The bodies of these women are made of tiny, dynamic, iridescent particles.

At the left of this painting are two chaicunis, hidden people that belong to the Pano group. They once lived together with other tribes of the same group, such as the Shipibo, Shetebo, and Cashibos. When the Spaniards arrived, they hid themselves. These are people of great wisdom.

In the lower left corner there is a yaku-pato [yaku = water, pato = duck], very knowledgeable on matters of the occult. He knows beautiful songs. Several spaceships fly over the cultivated fields, carrying people of great wisdom who come to give strength to the ayahuasca brew and the other plant-teachers.

In that vision I also saw an Amahuaca couple, a Campa-Ashaninka woman, and an Ayar, an Inca master of great knowledge. They are seen in the lower right corner.

The person covered by a red mantle is a vegetalista, irradiating waves that are his defense. A woman is preparing medicinal herbs. Next, we see a woman who comes from great caves in the Himalaya mountains. She normally lives in a galaxy called Mazzarot, where she is a netafita, a being who lives in the great nebulous mountains of the universe.

Princess Jerusela is about to receive a balsam from her father, a Baruh from Persia. She is very powerful, and with this balsam she is able to travel to any part of the world where people call her. A woman sleeping under a red blanket symbolizes the rejuvenating sleep that comes after a patient has been healed with the icaro Jerusela teaches.

The woman covered with a yellow mantle is Durela, a princess accompanied by a spirit who teaches prayers to be used in healing.

Two kings are seen on the upper floor. The one in a white dress cures mal aire and other illnesses. The one sitting on a throne cures sorcery. He knows millions of icaros. The queen in a blue dress defends the vegetalista when he is engaged in fights with his enemies. Her name is Galmana, which means that she is able to absorb the evil that comes from sorcerers.

A pregnant woman is seen in the foreground. All the experiences of the mother go to her child, before it is born. Her passions, her desires, her interests. If the mother likes art, music, the fetus will learn from all of this. The mother has to educate her child from the moment he is in her womb. 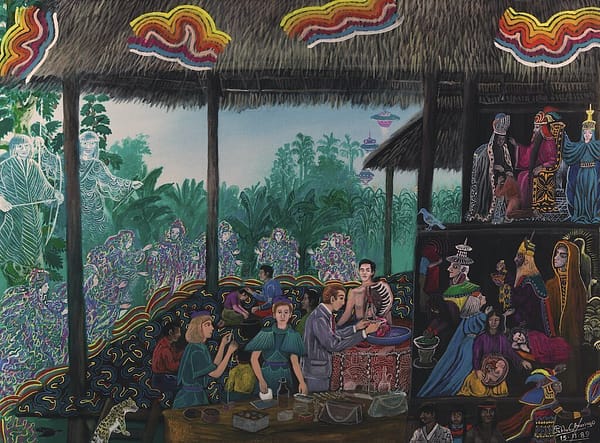