The Spirits Or Mothers Of The Plants

In this vision we see Shipibo vegetalistas in a trance. One of the shamans is being overwhelmed by the visions, but an old Indian is helping him through. The visions are so strong that the walls of the house they were in have disappeared, and the vegetalistas now find themselves in a jungle. There they see their guardian spirits, the mothers of the plants.

To the far left we see the remocaspi tree [Aspidosperma excelsum, Pithecellobium laetum] and its spirit. The spirit is a wise old Chinese king, wearing a golden crown. He bestows sublime wisdom upon those who have prepared themselves properly to eat of this plant. The king holds a scepter of death and will bring down its power upon anyone who has not followed the strict dietary regime that ingesting this plant requires. This plant’s cathartic medicine facilitates the knowledge of magical esoteric sciences.

The tree in front of him is the puka-lupuna tree [Cavanillesia hylogeiton], also known as lupuna colorada [red lupuna]. This tree’s mother-spirit is a woman of dark complexion with cat eyes and a gold chain around her neck. She is very useful to sorcerers who do evil things. The knowledge that this princess bestows is almost always turned towards sorcery and very seldom towards curanderos that heal and save lives. This tree also demands a strict and rigorous diet, and immediate death awaits the unprepared.

The third tree is the ajosquiro [Gallizia corazema]. Its spirit is a very small curly-haired man, wearing a red cape and red clothes. Few people ingest this plant, for the diet it requires is very rigid and severe. This is symbolized by the allcomachines, a group of ferocious monkeys who hang by their tails and jump wildly. This medicine is used as a defense against enemies. Those who ingest this plant become very hot and are constantly wanting to bathe.

In the background and to the right we see the renaquilla bush [Ficus sp.] wrapped around a tree. Its spirit is a Shipibo woman. If those who ingest this plant diet correctly, this Shipibo woman will come to them in their dreams and teach them to heal with this plant. This plant is unmatched in its curative power for treating fractures and other lesions, and it can be applied raw or cooked.

To the right is the great fakir Kadat. He is an expert in alquimia palística[plant alchemy].

In the upper right corner is the Angel of Solitude, playing the songs of solitude upon its lyre. These songs are meant to calm the sorrow-filled heart of an estranged lover and help him to forget the lost loved one.

In front of the renaquilla is the yahuar-toro [blood bull] who nourishes itself upon the yahuar-piripiri [Eleutherine bulbosa]. The icaro of this animal and plant serves as a cure for those who are suffering mal aire or have been harmed by the ayañahui [from aya = dead person, and ñahui = eye; firefly] or other malevolent beings like the Chullachaki or the Maligno [an evil spirit].

In the foreground are plants whose images appear as seated women in conversation. In visions the women are known as the sacha-huarmi[women of the forest]. These plants are found in certain places in the Amazon, generally where there are large rocks. But it is very hard to find and recognize them.

In front of the ajosquiro tree is the caballo piripiri [piripiri horse] [Cyperussp.]. Whoever ingests this plant acquires great strength. It is prepared in a mixture with jagua or huito [Genipa americana]. The jagua is mixed in careful, exact proportions with the piripiri, and in the morning it is poured over the entire body. One then avoids the sun, salt, sweets, garlic, liquor, and pig fat for eight days, while also abstaining from sex and socializing with anyone who is sexually active. The day after this mixture is poured over the body, the skin will turn black as if dyed with black ink. By the eighth day this coloration is gone.

At the foot of the caballo piripiri is a horned serpent that travels through the trees. This is a vibrantly colored serpent known as marupa-machaco. Its icaro is sung by vegetalistas who swallow the virotes [magical darts] they extract from poisonous snakes, fish quills, or wasp and scorpion stingers.

In the foreground left of center is the machashca cántaro [the pitcher of vision]. Many vegetalistas sing the icaros contained in this pitcher to guard themselves against an enemy’s visions and also to strengthen the power of their own visions.

In the background sitting by the lake is a woman serpent tamer, with a magical plant called pichana-machaco [unindentified]. This plant possesses an icaro used to cure the poisonous bites of snakes and other animals.

Further in the background a great garden stretches back to an enchanted castle on the outskirts of the dense city of Ankord. Ankord is a mysterious city that lies in some unknown part of the earth. Over the city circles a strange spaceship.

Rising from the middle of the lake is the great serpent Killo-urku-purahua [killo = yellow; urku = forehead]. With its magnetic stare it can hunt and capture any animal that crosses its path. Here it subdues an enemy sarara[Anhinga anhinga, a bird]. 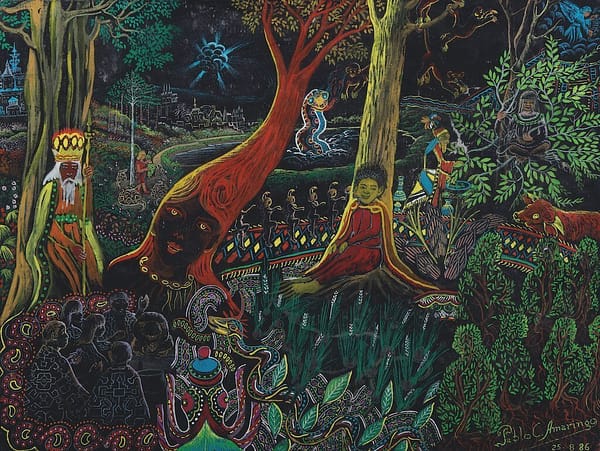