The Sublimity Of The Sumiruna

Through this hole the great characters of that world send a sumiruna to space with the help of the ancash silfos [blue sylphs] who transport him in a glass tube, which is the lupuna colorada [red lupuna, Cavanillesia sp.]. There we see him now, the sumiruna, standing on a ball of high-pressure gas, ready for levitation. He wears skins of the boa, trousers of ray-fish with feet of yangunturo [giant armadillo], and his hat is a macaw called yura-guacamayo.

Two acorones or giant boas open their mouths to let the animals and yakurunas used by vegetalistas give their farewells to the great sumiruna. White mermaids make the capsule levitate. Flying saucers hurry to receive it, and to accompany it in its astral travel.

At the right we see a great sumiruna who lifts a white serpent to give power to a young man, his son. That is why the young man’s shirt is painted. This sumiruna has prepared his shoes and his cap to give to the initiated young man as protection as he is guided by the spirits of the brew. The black-shirted vegetalista is a disciple. The boy in the back has taken ayahuasca for the first time, and that is why he is frightened by the visions.

Behind these persons we see the ayahuasca liana with its wave-like powers, and over it the so-called chicua birds, physical guardians of this plant. Above them is the atun-caballo [strong horse], which radiates alpha-vibrations. 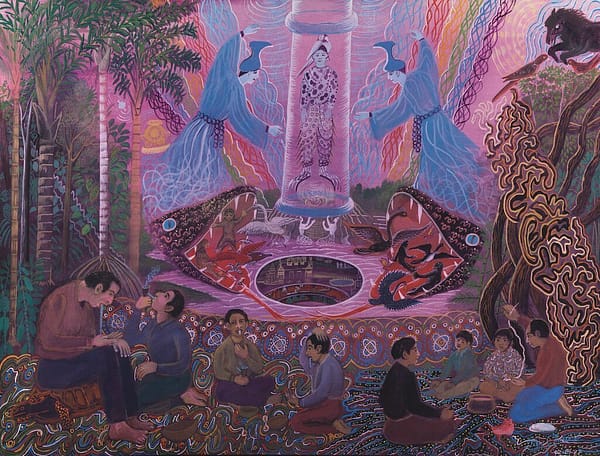