Pablos words:
On one of the occasions I took ayahuasca in Pucallpa, I saw in a vision the various types of evil vegetalistas that exist in the Amazon. The vegetalistashown here to the left is a Shipibo shaman. He is a chontero, a sorcerer who inflicts harm with his chontas or virotes, darts he makes from the thorns of various plants and trees, from the beak of certain birds, the fangs of snakes, or the hair of the casha-cushillo [porcupine, Coendu bicolor].

When a chontero wants to cause harm, he takes one of his chontas from his mariri and blows towards his victim — here we see how a man is hit with a chonta in his left arm. If previous to the attack the body of the victim has been properly treated by a good vegetalista, he will immediately feel that he has been hurt and will seek rapid remedy. If his body has not been treated, the victim might go around with great pain, ignorant of the cause of his misfortune, and he may even die.

In the center is a Cocama sorcerer. His evil wisdom encompasses the manipulation of marupas, or animals — insects, snakes, scorpions, bats, rays, toads, etc. — which he keeps in his mariri [magical phlegm] and which he sends to cause harm. This technique is called hechicería marupa [marupasorcery].

We see here how a woman is bitten by a snake sent by the Cocama sorcerer, who in his visions had already planned how he was to proceed. The victim feels the urge to go to a certain place, where the animal of the sorcerer will attack him or her.

To the right is a sorcerer who has the huaní as his weapon of harm. The huaní is a steel bow with a crystal arrow. He keeps the huaní under his left armpit. Inside his mariri he carries a living piranha. 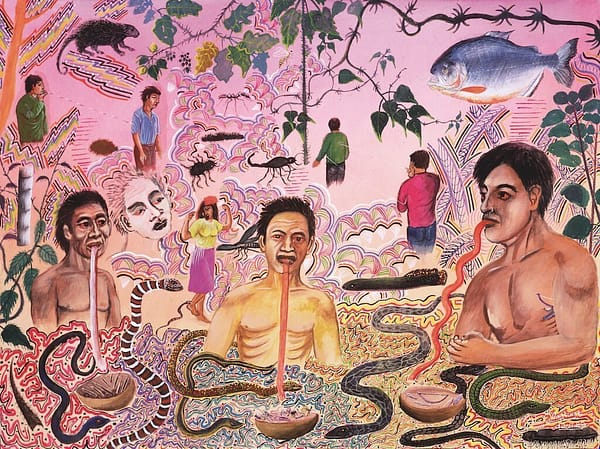