Vision Of The Snakes

In this vision we see anacondas and poisonous snakes. At the top left we see the Huairamama throwing its rainbow to the jungle to give strength to the medicine the healer prepares for his patient, who was bitten by a snake. In the background are beings with magnetic radiations who play music to make the icaro of concentration more pleasant. The one in the corner playing a horn has a destructive laser. In front of him sits Prince Harvadek playing the harp and enrapturing his listeners with the persuasive and melodious ultrasound of his esoteric songs. Next to him is a prince dressed in a yellow tunic and green cloak. He uses an enchanting flute with small green bells and diamond lights, capable of paralyzing the advance of any flying object.

Under the Huairamama we see the Abuelito Casiano, a great tamer with much wisdom in psychometric sciences. On the head of the Huairamamais a flying object in the form of a scorpion that has come from Saturn. Lower down you can see Mu Ni Ju, a great Chinese guru from the family of the great Sakias. He studies mystic subjects such as sacred Sanskrit, astronomic knowledge, and sublime powers for difficult cures. He has in his hand a magic healing stick and a scepter of cosmic, occult conjurations.

Further down is the Sachamama, throwing her rainbow charged with waves of light. Above her near the top we can see the Aya-angash [aya, dead; angash, blue] with healing powers bestowed by plants and flowers; and we see the Atun-angash, who takes care of the healers with whom she works.

At the top right corner are the great Queen Adonat and her ladies, Menit and Sieme, carrying boxes with balsam and aromatic ointments of white, dusky pink, and light-blue roses that cure wounds when their icaros are sung.

Under the rainbow of the Sachamama is Canessa, the great tamer of snakes and jungle animals. She is accompanied by her princesses Uzela and Vedina, who attack with their magic nets. At the riverside you can find the tuyuyos [the jabiru stork, Jabiru mycteria], sorcerer birds that hatch their chicks at the top of the lupuna [Ceiba sp.].

In the river you can see the quiruma-supay [tree stump spirit], who always comes out late at night in silent places.

To the left of the quiruma-supay you can see the mermaids with two tails. They only come out in sublime trances to cure sicknesses of the water, as when the Yakumama hurts us or the yaku-caballo, the rayamama, the dolphin, the anguila mama, etc. Next, we see the paiche machaco, a fish like the paiche [Arapaima gigans], but also a snake with a poisonous bite.

The yana-yaku-lobos [black water wolves] are in the foreground. These animals are used by healers as guards of the aquatic arkanas because they move very swiftly in the water. Above them we can see the huancahui[laughing falcon, Herpetotheres cachinnans] preparing to eat a snake. The icaro of this animal is good for stunning a snake and defeating it, leaving its bite without effect.

In the center, a little to the right, you can see a Yakumama throwing her magnet upward. The murayas [a type of shaman] use her to descend all the way to the deepest part of the river. Then she changes into a beautiful submarine. Further to the right is the purahua, who is also throwing a rainbow from his mouth.

All these snakes respond to the singing of the snakes’ icaro. At that time, they gather under the house and around it, and it is very dangerous to go out because they can bite. After curing, the healer sings another icaro to make the snakes go away from the house. 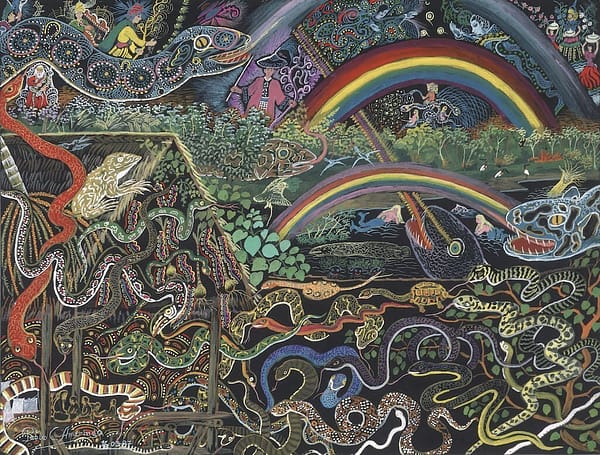